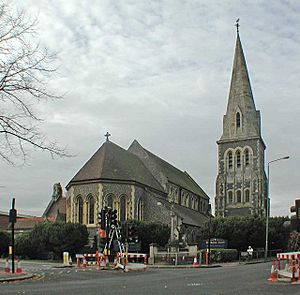 All Saints' Church from the east. 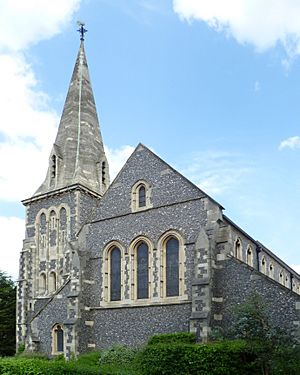 All Saints' Church from the west.

All Saints' Church is a Church of England church in Oakleigh Road North, Oakleigh Park, London. The church is sometimes referred to as All Saints' Friern Barnet. It is a grade II listed building.

The construction of the church was paid for by local land-owner John Miles who also donated the land on which it stands. He also provided the parish hall and the vicarage in Myddleton Park.

The church was built in around 1883 to an Early English Gothic Revival design by the architect Joseph Clarke. The body of the church consists of a nave with north and south aisles and an apsidal chancel, and there is a tower with a spire at the north-west corner. The building is faced in flint with ashlar dressings. The interior has murals by Thomas Gambier Parry.

All content from Kiddle encyclopedia articles (including the article images and facts) can be freely used under Attribution-ShareAlike license, unless stated otherwise. Cite this article:
All Saints' Church, Oakleigh Park Facts for Kids. Kiddle Encyclopedia.