The Cathedral Church of All Saints, also known as All Saints Cathedral, is a cathedral church of the Anglican Church of Canada in Halifax, Nova Scotia.

All Saints Cathedral is located on Cathedral Lane (formerly Martello Street) in the South End of the Halifax Peninsula. Built to a neo-gothic design by Ralph Adams Cram of Cram, Goodhue & Ferguson (of Boston and New York), the stone structure, minus the central tower which had been the design's most striking feature, was opened in 1910. The building is 255 feet (78 m) long; the nave is 68 feet (21 m) high and the chancel is 26 feet (7.9 m) wide. 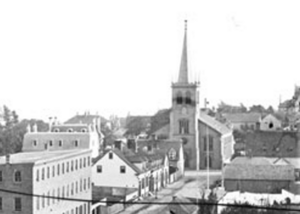 During the episcopate of Bishop Hibbert Binney from 1851 to 1887, a movement began for the erection of a cathedral. He hoped that the wooden St. Luke's pro-cathedral, erected in 1845, would be replaced by a stone building. After his father-in-law, William Blowers Bliss, donated a superb site on Robie Street at the head of Spring Garden Road, Binney had built St. Stephen's Chapel, which he hoped would become the church hall for the planned stone cathedral. Binney saw to the laying of a cornerstone on 12 August but died shortly afterwards and with his death, interest faded. His successor, Bishop Frederick Courtney, found himself too preoccupied to proceed and was also not enthusiastic. Neither, initially, was his successor, Clarendon Worrell, who was elected bishop in 1904.

After fire destroyed St. Luke's in 1905, Bishop Worrell "felt there was a call from God to take up the long neglected plan and give Nova Scotia the much needed Cathedral." Instead of the St. Stephen's site, he chose one of the "most commanding and central [sites] in the city, beautiful in appearance, easy access from all parts and not too far off for every member of St. Luke's and St. Stephen's to attend without inconvenience..." He chose the noted American architect Ralph Adams Cram to design a stone Gothic Revival cathedral. The Halifax firm of S.M. Brookfield, which had much experience in the building of stone structures, obtained the contract for the cathedral's construction. On 26 September 1907, Worrell turned the first sod and a month later he re-laid the cornerstone. 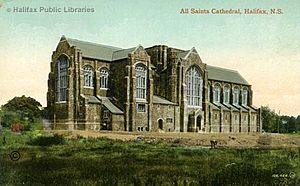 Depiction of the cathedral in 1911, shortly after its completion

Worrell was determined that the Cathedral opening should be seen as a national event of great importance to every member of the Canadian church. The year 1910 was the two hundredth anniversary of the first services after the capture of Annapolis Royal. As he told Synod in 1909: "I ask you to remember that what we are planning to celebrate is not the beginning of the parish of Annapolis, nor even the Diocese of Nova Scotia, but the beginning of the Church of England in Canada. For that reason it is not simply a local celebration in one place, but a general rejoicing in the Dominion with the central point in the See city of the oldest colonial diocese in the world." Not only did the Canadian Church Congress, with its representation from across Canada, meet in Halifax for the occasion, but also the event drew bishops and other clergy from Britain, United States and Newfoundland. The opening service was held on 3 September with the "great cathedral... crowded to its doors." In attendance were many dignitaries from other provinces, national organizations and universities. The service began with the procession of clergy, choir boys and men totalling 140 voices. Former bishop Frederick Courtney gave the sermon.

Stained glass in the Cathedral commemorates the men and women of the Diocese who died in World War I.

The sword of Philip Bent, who was killed in 1917, and is the only person born in Halifax to be awarded a Victoria Cross, is displayed in the Cathedral.

The Cathedral Organ was built originally in 1910 by Casavant of St Hyacinthe, Québec, and rebuilt by the British firm of Hill, Norman and Beard in 1961. In 2011, the original console was upgraded by Casavant and now includes 250 memories for its pistons, is MIDI capable, and can record performances to play later. Another advantage of the new console is that it is moveable so it can rest in its original intended location during services but be optimally re-positioned as required during choral concerts and organ recitals and performances. Also, during this recent upgrade the console was prepared with some additional stops as well as an antiphonal section for eventual installation in the Cathedral Narthex. Consisting of four manuals and seventy-five stops, the organ is the largest east of Montreal and serves admirably for service-playing and is also an impressive recital instrument. The organ has been played by many international performers.

All content from Kiddle encyclopedia articles (including the article images and facts) can be freely used under Attribution-ShareAlike license, unless stated otherwise. Cite this article:
All Saints Cathedral (Halifax, Nova Scotia) Facts for Kids. Kiddle Encyclopedia.