Although now located entirely within HRM, the peninsula was the original host to the town and now former City of Halifax. The founding of the town sparked Father Le Loutre's War. The original settlement was clustered in the southeastern part of the peninsula along The Narrows, between a series of forts (Fort Needham to the north, Fort George (Citadel Hill) in the middle, and Fort Massey to the south) and the harbour. The settlement expanded beyond its walls and gradually encroached over the entire peninsula, creating residential neighbourhoods defined by the peninsula's geography (in addition to the central business district) and referred to by Haligonians as:

The streets are set in a grid pattern the way town officials originally planned in the 18th century. 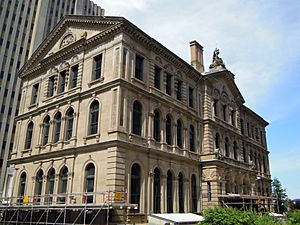 After a protracted struggle between residents and the Executive Council, the city was incorporated to in 1841. The former city of Halifax was contained entirely within the Halifax Peninsula; however in 1969, municipal amalgamation saw adjacent rural areas of Halifax County west of the isthmus amalgamated into the city, including Rockingham and Spryfield.

During this time, Rudyard Kipling paid homage to Halifax in his poem The Song of Cities:

Into the mist my guardian prows put forth,
Behind the mist my virgin ramparts lie,
The Warden of the Honour of the North,
Sleepless and veiled am I!

At this time the Halifax Public Gardens and Victoria Park, Halifax were created, with many Victorian Era monuments. Builders such as George Lang created many landmark buildings.

During 1916–1919 a mega construction project was undertaken by Canadian Government Railways (later Canadian National Railway) along the peninsula's Northwest Arm shoreline which saw a 4 km long rock cut blasted up to 30 m deep for a railway line running from Fairview Cove to serve the new Halifax Ocean Terminals which were built at the southeastern end; the rock from blasting work in the cut being used as infill for a portion of The Narrows.

On 1 April 1996, the government of Nova Scotia formed Halifax Regional Municipality, a single-tier regional government governing all of Halifax County. The City of Halifax became a provincial metropolitan area, and the HRM divided the former city into two separate community planning areas, Halifax Peninsula and Mainland Halifax, and at that time with separate community councils inside of the regional government. 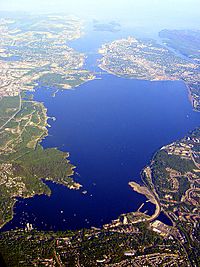 Extending from the western shore of Halifax Harbour, the peninsula is connected to the much larger Chebucto Peninsula by an isthmus measuring 2.6 km, defined by Fairview Cove and the Bedford Basin to the north and the Northwest Arm to the southwest. Down the length of this isthmus is Joseph Howe Drive, generally considered to be the boundary between the Halifax Peninsula and Mainland Halifax. The Halifax Peninsula creates The Narrows, a constriction of Halifax Harbour to its east.

Measuring 3.3 km at its widest and 7.5 km at its longest, the peninsula's topography is relatively flat near the isthmus where Chebucto Field, an aerodrome that preceded Halifax Stanfield International Airport was located. The northern end of the peninsula rises to a glacial drumlin at Fort Needham (approx. 60 m above sea level), with the central area of the peninsula being a plateau roughly 40–50 m. in elevation. Another drumlin approx. 60 m above sea level is located at Citadel Hill and immediately offshore to the east at Georges Island.

The bedrock of this peninsula is Precambrian slate. Glaciers during the Pleistocene era converted the rock surface to an olive-colored loamy till. Glaciation also removed reddish till from sedimentary rock to the north and redeposited it as a drumlin to form Citadel Hill. The stony loam to sandy loam soils are mapped as Bridgewater series on olive till and Wolfville series on the Citadel Hill drumlin. 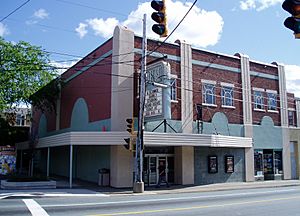 Oxford Theatre, on Quinpool Road in the peninsula's West End

All content from Kiddle encyclopedia articles (including the article images and facts) can be freely used under Attribution-ShareAlike license, unless stated otherwise. Cite this article:
Halifax Peninsula Facts for Kids. Kiddle Encyclopedia.