The Art Gallery of Nova Scotia (AGNS) is a public provincial art museum based in Halifax, Nova Scotia, Canada. The art museum's primary building complex is located in downtown Halifax, and takes up approximately 6,200 square metres (67,000 sq ft) of space. The museum complex is made up of the former Dominion building, and two floors of the adjacent Provincial building.

The museum was established in 1908 as the Nova Scotia Museum of Fine Arts, and was later renamed the Art Gallery of Nova Scotia in 1975. The museum moved into the Dominion building in 1988, and expanded the museum complex in 1998. From 2006 to 2020, the museum operated a satellite branch in Yarmouth.

The museum's permanent collection has over 18,000 works by Nova Scotian, Canadian, and international artists. Its collection is exhibited in its main location in Halifax, as well as its satellite branch in Yarmouth. In addition to exhibiting works from its permanent collection, the museum has also organized, and hosted a number of travelling arts exhibitions.

The art museum was founded as the Nova Scotia Museum of Fine Arts in 1908, in order to house the 200 works of the Crown of Nova Scotia. It was renamed the Art Gallery of Nova Scotia in 1975. During the museum's early history, the museum's collection, and its exhibits, moved between several locations, including at one point, in the gunpowder magazine of Citadel Hill. 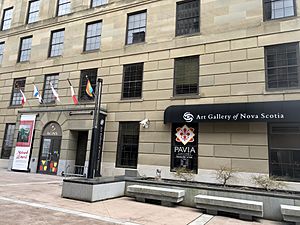 Access point to the museum at the Dominion building. The museum moved into the building in 1988.

In 1988, the museum moved to the Dominion Building, opened in 1867 and designed by architects David Stirling and William Hay. The museum expanded its building in 1998 to include two floors of the Provincial Building located just to the south of Dominion Building. The two structures are separated by Ondaatje Court, a public space that besides being used for temporary exhibitions, contains several large permanent sculptures. Underneath the courtyard is a large underground exhibition room which connects the two buildings. During the building expansion, work was done to accommodate the home of Maud Lewis into the museum building. Following that expansion, the museum's complex has 6,200 square metres (67,000 sq ft) of space, although only 19,500 square feet (1,810 m2) of it is used as exhibition space.

In 2008, the museum published a report that recommended the construction of a new museum building, citing its present downtown building as "seriously inadequate". The museum's administration also noted that the building's lack of climate control, and the region's weather has also made it difficult to preserve works at the location.

In March 2018, a feasibility study was completed that recommended that the museum, along with the post-secondary art school, NSCAD University, move to a new "cultural hub". However, when the museum announced its plans to build a 13,000 square metres (140,000 sq ft) building in April 2019, it did not include joint-facilities with the art school. The proposed building was located at Bishop's Landing, bounded by Lower Water Street, Salter Street, and the Halifax Boardwalk. The estimated cost to construct the building is C$130 million to C$140 million. The provincial government committed C$80 million, while the federal government committed C$30 million. The museum was tasked with raising C$30 million from public and private donors for the construction of the new building. 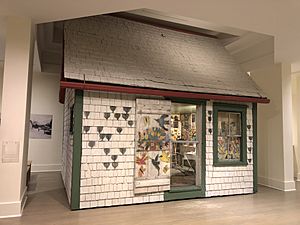 The restored Maud Lewis Home on display at the museum

In June 2013, the museum acquired a collection of 2,070 images by photographer Annie Leibovitz. The Leibovitz collection was donated to the museum by the Mintz family, after they acquired it for C$4.7 million. It includes 1,307 editioned prints, and 763 vintage file prints, with the earliest image dating to 1983. However, while the museum maintains ownership of the collection, its copyright is still held by the artist, pending a payment dispute between the donors, certification board, and artist.

The museum's collection also features works from a number of First Nations artists, including Kent Monkman.

All content from Kiddle encyclopedia articles (including the article images and facts) can be freely used under Attribution-ShareAlike license, unless stated otherwise. Cite this article:
Art Gallery of Nova Scotia Facts for Kids. Kiddle Encyclopedia.