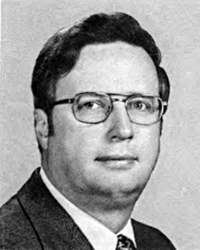 Allen Edward Ertel (November 7, 1936 – November 19, 2015) was an American politician. He was a member of the Democratic Party. He was born in Williamsport, Pennsylvania. He was a former member of the U.S. House of Representatives from Pennsylvania serving from January 3, 1977 through January 3, 1983. He lost re-election to Republican George Gekas in an upset election.

Ertel died from a heart attack in Williamsport, Pennsylvania, aged 79.

All content from Kiddle encyclopedia articles (including the article images and facts) can be freely used under Attribution-ShareAlike license, unless stated otherwise. Cite this article:
Allen E. Ertel Facts for Kids. Kiddle Encyclopedia.