Allosauroids were a clade of theropod dinosaurs. The oldest-known allosauroid, Shidaisaurus, appeared in the early Middle Jurassic (probably Bajocian stage) of China. The last known surviving members of the group died out around 93 million years ago in Asia (Shaochilong) and South America (Mapusaurus), though the megaraptorans, including the late-surviving Orkoraptor. Allosauroids had long, narrow skulls, large orbits, three-fingered hands, and usually had "horns" on their heads. The most famous and best understood allosauroid is the Allosaurus. 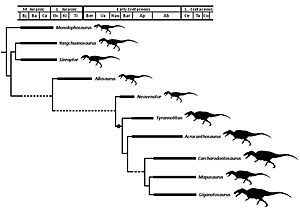 The cladogram of the classification of Allosauroidea

All content from Kiddle encyclopedia articles (including the article images and facts) can be freely used under Attribution-ShareAlike license, unless stated otherwise. Cite this article:
Allosauroidae Facts for Kids. Kiddle Encyclopedia.