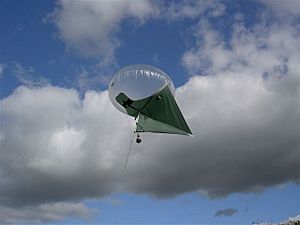 A Helikite lifting a gyro-stabilised camera

The Allsopp Helikite is a type of kite-balloon or kytoon designed by Sandy Allsopp in the UK in 1993. The Helikite comprises a combination of a helium balloon and a kite to form a single, aerodynamically sound tethered aircraft, that exploits both wind and helium for its lift.

Allsopp Helikites Ltd claim that numerous comparative aerostat flight trials and extensive operations worldwide over land and sea have demonstrated that the Helikite is the most reliable, energy-efficient, and economical persistent airborne platform design in the world.

The Helikite comprises a semi-rigid helium-filled balloon, having a rigid carbon-fibre spine, with the balloon shaped aerodynamically. The balloon is generally oblate-spheroid in shape although this is not essential. Solid spars provide attachment points for payload equipment.

In most winds the aerodynamic lift is greater than the aerostatic lift from the helium.

The Helikite design is intended for all-weather, high-altitude operation. The round, stubby shape allows it to be flown in any weather or for altitudes up to 7000 ft. In wind, both the main aerodynamic lift and the aerostatic lift are at the front, while the spar weight and keel are at the stern.

Helikites do not need ballonets and so are simpler in construction than traditional aerostats and Helikites do not need constant electrical power to keep them airborne. Helikites are also extremely stable and so are good aerial platforms for cameras or scientific instruments. Tiny Helikites will fly in all weathers, so these sizes are popular as they are very reliable but still easy to handle and do not require large expensive winches. Helikites can be small enough to fit fully inflated in a car but they can also be made large if heavy payloads are required to be flown to high altitudes. Helikites are one of the most popular aerostat designs and are widely used by the scientific community, military, photographers, geographers, police, first responders. Helikites are used by telecoms companies to lift 4G and 5G base stations for areas without cellphone coverage.

A Helikite is a new type of tethered aerostat with its own official classification, distinct from any type of balloon.

The US Customs classifies a Helikite as "other non-powered aircraft", while the British Civil Aviation Authority's Air Navigation Order has created its own classification as "Helikites" as distinct from "kites" and "balloons".

Customs authorities classify the Helikite as a type of kite because of the considerable positive aerodynamic uplift in wind.

After various sea-trials by Norwegian and British oil-spill response organizations, it was determined that Helikites were the only compact aerostat capable of reliably operating at sea for this purpose. For this reason, small rapid-response surveillance Helikites are part of the emergency oil-spill response system of Scandinavia and the UK for operations in the Arctic Ocean.

Due to their stability, Helikites are capable of successfully operating non-gyrostabilised cameras..

The British Army military Helikite surveillance system has 34 m³ volume and lifts a lightweight gyro camera with both E/O and IR capabilities. The US surveillance Helikites are 75m³ and carries a larger gyro camera system and targeting equipment. These aerostats outperform a conventional aerostat of twice the size. These Helikites can lift surveillance equipment above the range of small arms fire, effectively making Helikites unassailable to most common threats.

The smallest Helikite ever made was of just 0.028m³ (1 cubic ft). It flew well despite its tiny size. The largest Helikite made so far is 250m³ (8,750) cubic ft which has a net helium lift of 117 kg. This has been used by the Max Plankt Institute for flights up to 7,000ft for cloud droplet research, flying from ocean research ships steaming across the Atlantic.

All content from Kiddle encyclopedia articles (including the article images and facts) can be freely used under Attribution-ShareAlike license, unless stated otherwise. Cite this article:
Allsopp Helikite Facts for Kids. Kiddle Encyclopedia.