On August 22, 2011, Six Flags Great Escape Lodge & White Water Bay announce on their Facebook page that there is going to be a big surprise for their loyal fans of the lodge on Thursday September 1, 2011. Then on the first of September 2011, the Great Escape announced Alpine Freefalls for the 2012 season. Alpine Freefalls opened to the public on June 2, 2012, a couple weeks after Splashwater Kingdom opened for the season. 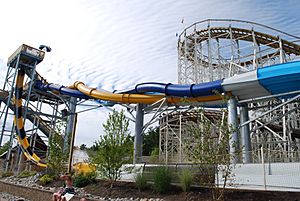 Alpine Freefalls is a Nordic-themed attraction, that features two rides on one complex structure.

Cliffhanger is the park's first free-fall speed slide with Skybox technology. The ride is on the tallest part of the structure at six stories tall. Once you entered the skybox, the floor will drop below you and you will free fall 32 miles per hour (51 km/h) down the slide on an 80 degree drop into six inches of water. Riders must be 48 tall.

Twisted Racer is the Northeast's first of its kind mat racer. The ride will be four stories tall on the structure, and it features four lanes with fully enclosed tunnels. You will speed head-first on mats through pretzel-shaped tubes before opening up into a final drop and a straight shot to the finish line at speeds of over 25 feet per second. Riders must be 42 tall.

All content from Kiddle encyclopedia articles (including the article images and facts) can be freely used under Attribution-ShareAlike license, unless stated otherwise. Cite this article:
Alpine Freefalls Facts for Kids. Kiddle Encyclopedia.