The Great Escape and Hurricane Harbor facts for kids

The Great Escape and Hurricane Harbor is an amusement and water park owned and operated by Six Flags Entertainment Corp. It is located approximately 60 miles (97 km) north of Albany, in Queensbury, New York. It is one of three Six Flags parks not to be officially branded with the "Six Flags" name, with La Ronde in Montreal, Quebec, Canada and Frontier City in Oklahoma City, Oklahoma being the two others.

Great Escape logo used up until 2012

The Great Escape was opened in 1954 as Storytown USA, a Mother Goose themed amusement park by businessman Charles Wood who bought the land with his wife for $75,000. In 1957, realizing that the park was geared only toward small children, the park opened its Ghosttown area, the first of many themed areas opened in the park's history.

For publicity, the park placed bumper stickers on every car in the parking lot. This practice stopped a few years later due to complaints and employees switched to attaching cardboard versions with wire. This was back in the day when a car bumper was separate from the body and you could get all the way around it with wire. In 1983, the park officially changed its name from Storytown USA to The Great Escape.

The park debuted several new features for the 2006 season. These included character greetings from the likes of the whole Justice League.

For the 2007 season, The Great Escape re-themed their dive show to a pirate themed show, branded their pizza restaurant a Papa John's, and brought back the Superstars and Legends: Elvis! Show (Which featured throughout the summer not only Elvis, but also Buddy Holly, and Billy Joel) to JollyTree Theatre.

In addition to typical amusement park rides, the Great Escape offers a variety of unique shows, most notable of which is a high dive show featuring a team of divers scaling an 80 feet (24 m) tower and plunging into a 10 feet (3.0 m) deep pool. This also features a fire diver. 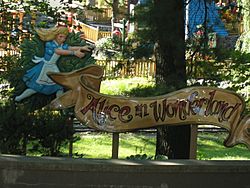 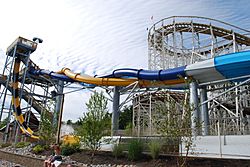 This area typically features a more German theme. German-style music can be heard playing throughout this area along with other 'German' food stands such as funnel cake. 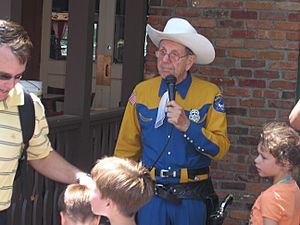 Marshal McKay before his daily show. 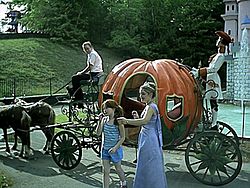 A girl and Cinderella getting out of her pumpkin coach.

This section opened in 2005 as Looney Tunes National Park. 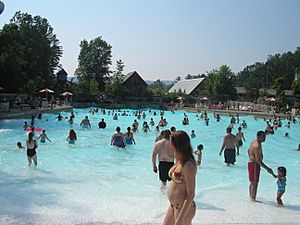 Lumberjack Splash wave pool in use.

These rides are not included in the admission price. Cost varies from ride to ride.

After Labor Day the Great Escape has two special events, Oktoberfest and Fright Fest, before closing for the winter. Oktoberfest is held during the weekends in September, while Fright Fest is held Fridays thru Sundays in October.

Oktoberfest is marginally a celebration of German heritage but is expanded to include ethnic foods, various beer games, ethnic music and dancing and other activities. (In the past, vendors were included, but none since 2006).

Fright Fest has the entire park decorated for Halloween, while many of the usual shows are changed over to Halloween events as well including trick or treating among the miniature houses in Ghost-town and 4 elaborate haunted houses, which are located near the North-woods Picnic Grove and in the Ghost Town.

In 2009, The Great Escape experimented with a late-season festival named "Holiday in the Park". It included live entertainment and holiday-themed shows, lights adorning the park and a sledding hill making it the winter equivalent of the Fright Fest autumn event. Though Six Flags called the 2009 event successful, it also claimed a "business decision" was the reason behind the cancellation of the "Holiday in the Park" for the 2010 season. 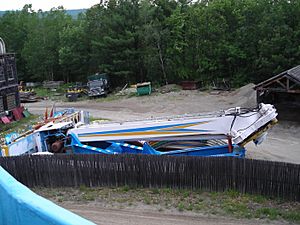 All content from Kiddle encyclopedia articles (including the article images and facts) can be freely used under Attribution-ShareAlike license, unless stated otherwise. Cite this article:
The Great Escape and Hurricane Harbor Facts for Kids. Kiddle Encyclopedia.