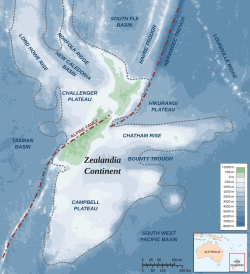 Movement along the Alpine Fault is deforming the microcontinent of Zealandia, with the southern part (on the Pacific Plate) sliding past and slightly onto the northwest part (on the Indo-Australian Plate)

The Alpine Fault is a geological fault that runs entirely through New Zealand's South Island. It forms a boundary between the Pacific Plate and the Indo-Australian Plate. Earthquakes along the fault have formed the Southern Alps.

All content from Kiddle encyclopedia articles (including the article images and facts) can be freely used under Attribution-ShareAlike license, unless stated otherwise. Cite this article:
Alpine fault Facts for Kids. Kiddle Encyclopedia.