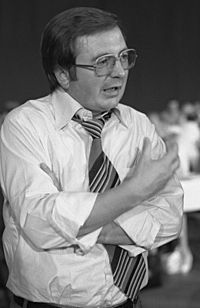 Alwin Brück (23 September 1931 – 14 February 2020) was a German politician. He was a member of the Social Democratic Party of Germany (SPD). He was Parliamentary Secretary of the Federal Ministry of Economic Cooperation and Development from 1974 to 1982. He also was Deputy of the Bundestag from 1965 to 1969 and Substitute Member of the Parliamentary Assembly of the Council of Europe from 1969 to 1970. Brück was born in Heusweiler, Germany.

All content from Kiddle encyclopedia articles (including the article images and facts) can be freely used under Attribution-ShareAlike license, unless stated otherwise. Cite this article:
Alwin Brück Facts for Kids. Kiddle Encyclopedia.