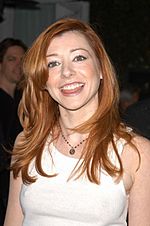 Alyson Lee Hannigan is an American actress. She was born March 24, 1974 in Washington, D.C. She moved to Atlanta, Georgia when she was 2 years old to live with her mother. She started to act in commercials for McDonalds, Six Flags amusement parks and Oreo cookies when she was small. When she was 11, she went to Los Angeles with her mother to go to school and become famous. She started getting noticed with her roles in Buffy the Vampire Slayer as Willow Rosenberg and in the American Pie movies as Michelle Flaherty. She is currently on the television series How I Met Your Mother.

All content from Kiddle encyclopedia articles (including the article images and facts) can be freely used under Attribution-ShareAlike license, unless stated otherwise. Cite this article:
Alyson Hannigan Facts for Kids. Kiddle Encyclopedia.