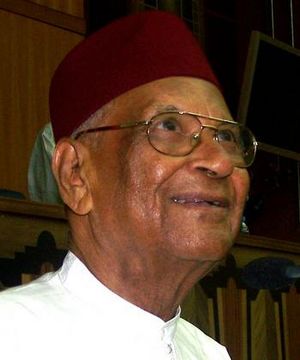 M'bow served in France and North Africa during World War II after volunteering for the French army. After the end of the war he studied geography at the Sorbonne University in Paris.

M'bow began working for UNESCO in 1953 and was the director-general from 1974 to 1987, being the first black African to head a United Nations support organisation.

All content from Kiddle encyclopedia articles (including the article images and facts) can be freely used under Attribution-ShareAlike license, unless stated otherwise. Cite this article:
Amadou-Mahtar M'Bow Facts for Kids. Kiddle Encyclopedia.