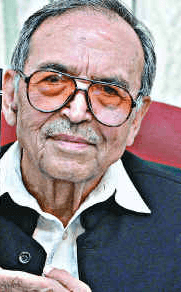 Amanullah Khan (24 August 1934 – 26 April 2016) was a Pakistani activist and writer. He was born in Astore. He was the founding leader of the Jammu and Kashmir Liberation Front. It was a pro-independence militant activist group in the former state of Jammu and Kashmir.

He was the co-founder of the Kashmir Independent Committee in 1963. He was elected Secretary General of JK Plebiscite Front (PF) in 1965. He Co-founded the JK National Liberation Front (NLF) with Maqbool Bhat.

Khan died on 26 April 2016 at a hospital from chronic obstructive pulmonary disease in Rawalpindi, Pakistan, aged 82.

All content from Kiddle encyclopedia articles (including the article images and facts) can be freely used under Attribution-ShareAlike license, unless stated otherwise. Cite this article:
Amanullah Khan (activist) Facts for Kids. Kiddle Encyclopedia.