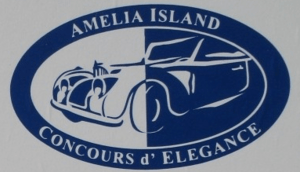 The Amelia Island Concours d'Elegance is an automotive charitable event held each year during the second weekend in March at The Ritz-Carlton Amelia Island in Amelia Island, Florida. A The New York Times article about celebrity car ownership listed "the nation's top concours d'elegance: Pebble Beach in California, Meadow Brook in Michigan, Amelia Island in Florida and the Louis Vuitton Classic in midtown Manhattan."

A concours d'elegance (French, literally "a competition of elegance") is according to The New York Times writer Keith Martin like a "beauty pageant for rare and elegant cars". Each entry is rated for authenticity, function, history, style and quality of restoration by a team of judges that includes specialists for each car type. A perfect score is 100, but any imperfection, no matter how slight, requires a fractional point deduction. Classes are arranged by type, marque, coachbuilder, country of origin, or time period.

Judges select first-, second-, and third-place finishers for each class in the event, and the judges confer the best of show award on one car from the group of first-place winners. In addition, a group of honorary judges—typically individuals who have made significant contributions to the automotive industry or motorsports—give subjective awards to recognize standout vehicles regardless of class ribbons, as well as memorial awards created to honor automotive industry personages.

Businessman and car collector Bill Warner, a photographer and writer for Road & Track magazine since 1971, founded the Amelia Island Concours d'Elegance in 1996 at the urging of other northeast Florida auto enthusiasts who wanted a classic car show in Florida like the Pebble Beach Concours d'Elegance in California. Warner selected Community Hospice of Northeast Florida, which had provided service to his parents as well as his wife, as the beneficiary of the event. The first event was held April 6, 1996, at Ritz-Carlton Amelia Island. Warner assembled a group of 163 cars and attendance was around 2,200.

By 1999 attendance had increased to 8,500; 205 cars were exhibited; and $268,000 was raised for Community Hospice. The New York Times assigned a reporter to write a story. In his full-page feature article, Keith Martin stated, "The Amelia Island event, which is sponsored by Mercedes-Benz, is the only one in its region to aspire to the same standard of excellence (as the) Concours d'Elegance at Pebble Beach, in California, as well as the Louis Vuitton Classic at Rockefeller Center".

Each year's Amelia Island Concours honors an outstanding person from motorsports, a featured marque (manufacturer) and/or theme, plus judging and awards for each class of the Field of Dreams, the showcase exhibition. Events have included a golf tournament, automobile auctions, art and fashion shows, dinners with honored guests, silent auctions of memorabilia, charity raffles and autograph sessions. The top concours awards are the Best of Show Concours d'Elegance and the Best of Show Concours de Sport. Additionally, there are various corporate awards, vehicle class awards, and special awards such as the People's Choice award.

Entrants submit an application for each car, and the Concours field is selected from each year's pool of applicants. Vehicles newer than 1974 models are normally not eligible to enter, and vehicle participation is by invitation only. Many collectors spend years and hundreds of thousands of dollars purchasing and restoring a car in hopes of being chosen. Once a car is accepted to the Concours, it cannot again be entered in the event for five years, with three exceptions; the ownership of the car has changed, the car has been restored, or if the featured marque is obscure, the Concours car selection committee can reach out to invite cars of varying restoration quality—or cars that have previously been entered in the Concours—in order to provide a healthy representation of the marque for exhibition.

Most of the owners display their cars because they want everyone who appreciates style and beauty to see their project. Most view the weekend as a social gathering rather than a special interest event. The organizers attempt to invite vehicles from varying time periods so that spectators who prefer a certain style of car will always find several examples to examine. Many of the competing cars are valued in the hundreds of thousands of dollars, with some worth millions. For this reason, along with its setting and amenities, the Amelia Island Concours is considered one of the premier concours in the world.

The non-profit Amelia Island Concours d'Elegance Foundation was formed in 2000 to organize and manage the workload of more than 300 volunteers. The proceeds of the Amelia Island Concours d'Elegance have helped support Community Hospice of Northeast Florida with total contributions of over $1.5 million through 2008. The event's goal is to raise at least $100,000 for Community Hospice each year. Other charities receiving funding include The Spina Bifida Association of Florida at Jacksonville, Shop with Cops, Duval County 4-H Foundation and the Navy Marine Corps Relief Society. The concours' foundation has donated over $3.5 million since 1996 to these charitable organizations.

All content from Kiddle encyclopedia articles (including the article images and facts) can be freely used under Attribution-ShareAlike license, unless stated otherwise. Cite this article:
Amelia Island Concours d'Elegance Facts for Kids. Kiddle Encyclopedia.