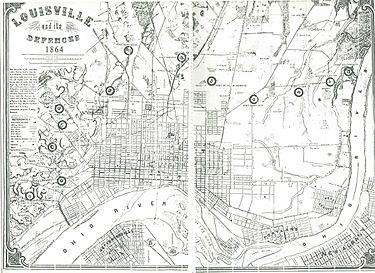 1864 map showing the eleven forts and other defenses. Viewed from the north; Kentucky is above the river, Indiana below.

Louisville's fortifications for the American Civil War were designed to protect Louisville, Kentucky, as it was an important supply station for the Union's fight in the western theater of the war. They were typically named for fallen Union officers; usually those that served in the Army of the Ohio. The inspiration for building the forts came in October 1862, when Confederate forces engaged in their largest attack in Kentucky, only to be halted at the Battle of Perryville. Construction began in 1863, going at a slow pace until Confederate forces marched on Nashville, Tennessee, in the autumn of 1864. This caused General Hugh Ewing to demand from the city to force both military convicts and local "loafers" to help build the fortifications. Due to military engineers being needed on the front lines, the fortifications in Louisville were designed by civilian assistant engineers, as were the ones in Cincinnati, Ohio. Louisville was never endangered, so the guns never fired, save for salutes. 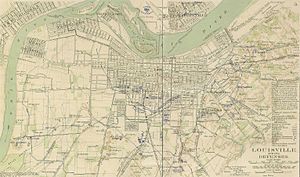 Much more detailed image of Louisville's Civil War forts in June 1865. Click to view in detail.

They typically held a minimum of 50 artillerists and 200 infantrymen, with four to six cannon. Twelve batteries were to back up eleven forts in a 10 and a half mile arc around the city, relying on the Ohio River to protect the city's northern flank. They were placed in prominent positions, where they could engage in a cross-fire of opposing forces. The forts' lengths were between 550 and 700 feet (210 m), with walls fifteen to thirty feet thick, and six to eight feet high. 200 rounds for each gun were available in the forts.

Only two of the proposed twelve batteries were constructed:

By March 31, 1865, the eleven forts were mostly completed. On May 1, progress of the fortifications had ended, as the majority of Confederate forces had already surrendered. Forty-four to sixty-six artillery pieces were to be used at the forts, but only twenty-two had been installed by the time construction was halted.

None of these protections for Louisville have survived into the 21st century.

All content from Kiddle encyclopedia articles (including the article images and facts) can be freely used under Attribution-ShareAlike license, unless stated otherwise. Cite this article:
American Civil War fortifications in Louisville Facts for Kids. Kiddle Encyclopedia.