American Fighter Aces Association is a non-profit organization which recognizes the 1,450 combat American pilots (referred to as Aces) who have had five or more aerial victories in combat. The AFAA is located in Seattle's Museum of Flight. The exhibit houses documents, artifacts and histories of the Aces.

The American Fighter Aces Association was founded in 1960 to honor the 1,450 American "Ace" pilots. On September 23, 1960, The AFAA held its first reunion in San Francisco, Calif. To be a member honored by the association a pilot needs to have shot down at least five enemy aircraft in combat.

The mission of the organization is to Preserve the records of American combat fighter Aces. Part of the mission is also to educate future generations. The AFAA also awards scholarships each year. 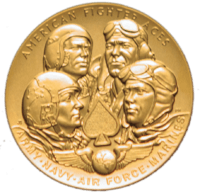 A gold medal awarded in May 2015 in recognition of all U.S. fighter aces

All content from Kiddle encyclopedia articles (including the article images and facts) can be freely used under Attribution-ShareAlike license, unless stated otherwise. Cite this article:
American Fighter Aces Association Facts for Kids. Kiddle Encyclopedia.