The American Treasure Tour is a tourist attraction established in 2010 and opened to the public for guided tours. Visitors travel through a large private collection that encompasses an eclectic variety of smaller collections. Included is one of the world's largest private collections of automatic music machines: nickelodeons, band organs, calliopes, photoplayers and music boxes. There are also classic cars, circus art, dolls and dollhouses, and a large assortment of popular culture miscellania. It is located in the 422 Business Center in the community of Oaks, Pennsylvania, west of Valley Forge National Historical Park just off of U.S. Route 422.

The collection is located in Oaks, Pennsylvania, in a former B.F. Goodrich tire factory building. The factory was opened in 1937 and active in tire production until its closure in 1986, shortly before Goodrich sold their production line, and the name of their brand, to the Michelin Company. The former plant has since been completely re-purposed. The first floor of the building is currently used for commercial space, including such businesses as the Arnold's Family Fun Center and the Dump discount furniture outlet. Most of the second floor, however, is the repository for the collection that comprises the American Treasure Tour. The building complex is 1.2 million square feet while the ATT comprises 100,000 square feet, about the size of a big-box store.

The ATT has on display the private collection of one person, who remains anonymous at his request. The collection includes (but is not restricted to): carousel band organs, calliopes, nickelodeons (also known as orchestrions), movie posters and celebrity photographs, vinyl record albums (33-1/3, 48 and 78 speed), Edison cylinder players, antique and modern animated store displays, circus and clown art, pedal cars, model airplanes, and classic cars. A second element is the music box collection, on loan to the ATT by the Music Box Society International (MBSI), an organization of aficionados of automatic music. The ATT is the repository for over one hundred pieces from MBSI's extended collection. Many of these are on display and played for visitors. The MBSI has also utilized the ATT as a site for group meetings.

The tour consists of two parts: The Music Room, which is predominantly seated with mild walking and The Toy Box, which incorporates a tram ride.

The Music Room has record albums, movie posters and celebrity photographs covering the walls. Located in the room are a majority of the collection's nickelodeons, dolls, dollhouses, and photoplayers, as well as the MBSI music boxes. The guides use modern iPad technology to turn on selected nickelodeons and instructional videos for visitors. Tours include the playing of numerous machines and brief historical stories told by the guide about the era during which the machines were popular. There are over 150 automatic music machines on display in the Music Room. Highlights among them include: 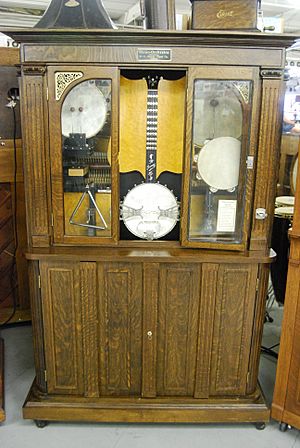 The Toy Box takes up the majority of the space in the American Treasure Tour. Visitors are driven in an electric tram down lanes displayed with an eclectic collection of Americana on both sides and hanging from the ceiling. Tours are conducted by guides who discuss the items, including: model airplanes, classic cars, more automatic musical instruments, original artwork, movie memorabilia and Disneyana, stuffed animals, animated store displays, motorcycles, and neon signage. Highlights include: 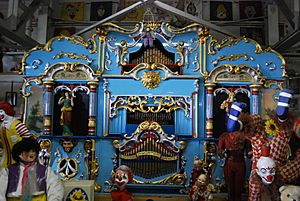 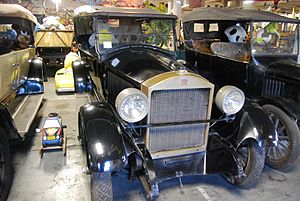 The anonymous owner of the collection that comprises the majority of the American Treasure Tour (sans the MBSI collection) continues to regularly bring in new pieces, which are incorporated into the tours whenever space allows.

All content from Kiddle encyclopedia articles (including the article images and facts) can be freely used under Attribution-ShareAlike license, unless stated otherwise. Cite this article:
American Treasure Tour Facts for Kids. Kiddle Encyclopedia.