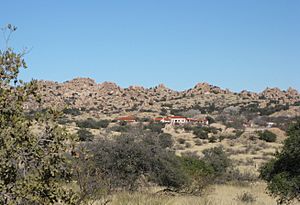 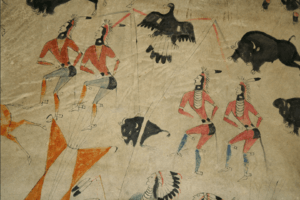 Detail of a 19th century elk hide Story robe painted by the Shoshoni artist Katsikodi, on display at Amerind.

The Amerind Foundation is a museum and research facility dedicated to the preservation and interpretation of Native American cultures and their histories. Its facilities are located near the village of Dragoon in Cochise County, Arizona, about 65 miles east of Tucson in Texas Canyon.

William Shirley Fulton (1880–1964), an archaeologist, established the Amerind Foundation in 1937.

The Amerind Foundation's building was designed by Tucson architect Merritt Starkweather and contains one of the finest collections of archaeological and ethnological artifacts in the country as well as a sizable research library.

According to the Foundation's literature, "Amerind" is a contraction of the words "American" and "Indian".

The museum's permanent exhibits include archaeological artifacts from the Amerind property by founder William Shirley Fulton and later by director Charles C. Di Peso, as well as items found at Di Peso at Casas Grandes, Chihuahua, Mexico and other excavations. The objects include weapons, tools, baskets, sandals, cordage of human hair, and cloth.

All content from Kiddle encyclopedia articles (including the article images and facts) can be freely used under Attribution-ShareAlike license, unless stated otherwise. Cite this article:
Amerind Foundation Facts for Kids. Kiddle Encyclopedia.