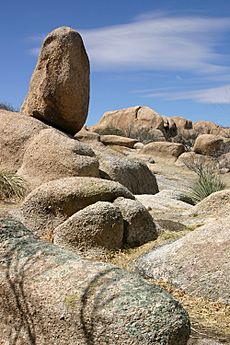 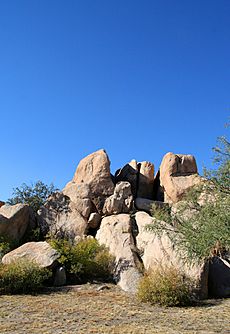 The stagecoach route of the Butterfield Overland Mail passed through Texas Canyon from 1858 until the outbreak of the Civil War in 1862, when the stage line suspended operations. The canyon is historically within the range of the Chiricahua Apache, and Cochise made his last stronghold near here in the Dragoon Mountains during the mid-1870s.

In the mid to late 1880s, David A. Adams, a Cochise County pioneer, moved to the area from Coleman County, Texas, soon to be followed by other family members. Descendants still live and raise cattle on the old family ranch.

The Amerind Foundation, a privately funded archaeological and ethnographic research facility, library, museum and art gallery founded by William Shirley Fulton in the 1930s, is located in Texas Canyon a short distance from exit 318 of Interstate 10.

All content from Kiddle encyclopedia articles (including the article images and facts) can be freely used under Attribution-ShareAlike license, unless stated otherwise. Cite this article:
Texas Canyon Facts for Kids. Kiddle Encyclopedia.