Benson is a city in Cochise County, Arizona, United States, 45 miles (72 km) east-southeast of Tucson. It was founded as a rail terminal for the area, and still serves as such. As of the 2010 census, the population of the city was 5,105.

The city was founded in 1880 when the Southern Pacific Railroad came through. It was named after Judge William B. Benson, a friend of Charles Crocker, president of the Southern Pacific. The railroad, coming overland from California, chose the Benson site to cross the San Pedro River. Benson then served as a rail junction point to obtain ore and refined metal by wagon, in turn shipping rail freight back to the mines at Tombstone, Fairbank, Contention and Bisbee. For example, the railhead in Benson was about 25 miles (40 km) from Tombstone, and was the closest rail connection to it until 1882, when a feeder line was laid from Benson to Contention City.

The railhead in Benson was founded about a mile from a traditional crossing of the upper San Pedro River (known also as the Middle Crossing), used by the Southern Emigrant Trail and San Antonio-San Diego Mail Line. It was the site of the San Pedro Station of the Butterfield Overland Mail and a wagon depot, the San Pedro River Station, run since 1871 by William Ohnesorgen. In 1878 he had erected a toll bridge over which mining supplies were transported to the new mining camps such as Fairbank and Tombstone. Two years later this bridge marked the location of the railroad bridge that became the terminal site of Benson.

The city today is perhaps best known as the gateway to Kartchner Caverns State Park. It is also home to the acclaimed Singing Wind Bookshop, which specializes in books about the Southwest.

The 40,000-acre (160 km2) Jay Six cattle ranch is located just outside Benson. The ranch played host to political figures like the young brothers Joseph and Jack Kennedy, and to senior statesman Barry Goldwater. The Kennedy brothers (Joe age 21 and Jack age 19) were sent out to the ranch in the spring of 1936 so that the brothers could work as ranch hands, and so that Jack Kennedy could recuperate from a recent illness in the dry desert heat. It is reported that ranchman Jack Speiden worked both brothers "very hard".

Benson first appeared on the 1890 U.S. Census as an unincorporated village. It did not appear on the 1900 census. It reappeared again in 1910. It did not return separately (as a village) in 1920, but the population for the Benson Precinct of Cochise County (825) was substituted (which included the village of Benson and adjacent area). It formally incorporated as a town in 1924 and has returned on every census since 1930. On March 26, 1985, voters approved a resolution upgrading Benson to city status.

Similar to other desert plains areas of Arizona, Benson receives little rainfall and is relatively hot. Some snow occasionally falls in the winter. 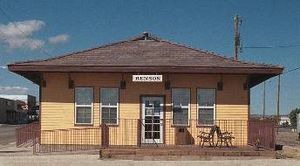 Amtrak provides passenger rail service at 105 E. 4th Street, where it serves as a stop for the Sunset Limited and Texas Eagle lines (as of 2021). Freight railroads serving Benson are the Union Pacific Railroad and the San Pedro and Southwestern Railroad. Benson is also served by Greyhound between Phoenix and El Paso or Sierra Vista. 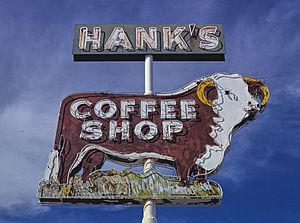 The World University is located in Benson.

The Benson Unified School District is a K-12 public school serving the Benson area. Their mascot is the Benson Bobcat.

Cochise College has a branch located on Route 90.

All content from Kiddle encyclopedia articles (including the article images and facts) can be freely used under Attribution-ShareAlike license, unless stated otherwise. Cite this article:
Benson, Arizona Facts for Kids. Kiddle Encyclopedia.