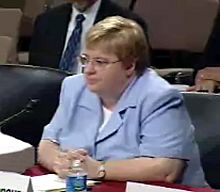 Amy Ridenour shown testifying before a hearing of the Senate Indian Affairs Committee on June 22, 2005, in regards to her involvement in the Jack Abramoff scandal.

Amy Moritz Ridenour (November 9, 1959 – March 31, 2017) was an American political activist. She served as president of the National Center for Public Policy Research, a Washington, D.C. conservative think tank. Ridenour held this post since the organization's founding in 1982 until her death in 2017. She was born in Pittsburgh, Pennsylvania.

All content from Kiddle encyclopedia articles (including the article images and facts) can be freely used under Attribution-ShareAlike license, unless stated otherwise. Cite this article:
Amy Ridenour Facts for Kids. Kiddle Encyclopedia.