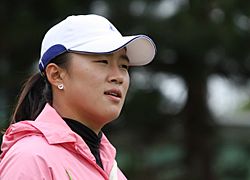 Amy Yang (born July 28, 1989) also known as Yang Hee-Young is a Korean professional golfer. She plays on the United States-based Ladies Professional Golf Association (LPGA) tour and on the Ladies European Tour (LET). Since turning professional at age 17, she has six professional wins.

Yang began playing golf at age 10. She moved to Australia with her family at age 15 to play golf. In 2005 she won the "Queensland Amateur Championship", the youngest winner ever of that championship. In 2006, while still an amateur she won the ANZ Ladies Masters on the Ladies European Tour. Yang was also the youngest winner ever on the LET at age 16 years, 6 months and 18 days. She was given an exception to join the LET at age 17. Yang qualified for the LGPA on her first attempt.

All content from Kiddle encyclopedia articles (including the article images and facts) can be freely used under Attribution-ShareAlike license, unless stated otherwise. Cite this article:
Amy Yang Facts for Kids. Kiddle Encyclopedia.