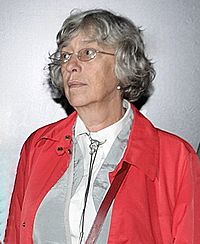 Anne Bourguignon (9 August 1950 – 30 April 2019) was a French actress. She started using her stage name Anémone, after appearing as the title character in her first movie, Philippe Garrel's Anémone (1968). Her best known movie roles were in Santa Claus Is a Stinker (1982) and The Grand Highway (1987). She was nominated for five César Awards. In 1988, for her role as Marcelle in The Grand Highway, she won the César Award for Best Actress. She was born in Paris.

All content from Kiddle encyclopedia articles (including the article images and facts) can be freely used under Attribution-ShareAlike license, unless stated otherwise. Cite this article:
Anémone Facts for Kids. Kiddle Encyclopedia.