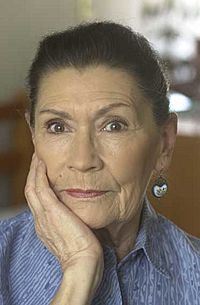 Ana Ofelia Murguía (born 8 December 1933) is a Mexican actress. She was born in Mexico City. Her early well known roles were in The Queen of the Night (1994) as Doña Victoria and as Doña Rosa in Nobody Will Speak of Us When We're Dead (1995). Her career began in 1968. In recent years, she is best known for voicing Mama Coco in the 2017 Disney-Pixar animated movie Coco.

All content from Kiddle encyclopedia articles (including the article images and facts) can be freely used under Attribution-ShareAlike license, unless stated otherwise. Cite this article:
Ana Ofelia Murguía Facts for Kids. Kiddle Encyclopedia.