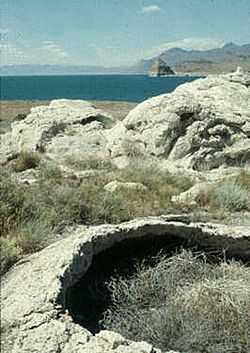 Anaho Island is a rocky island in Pyramid Lake, and located on the Pyramid Lake Indian Reservation, Washoe County, in the U.S. state of Nevada.

The island is located in the southeastern section of the lake, approximately 4 miles (6.4 km) east of the community of Sutcliffe.

The entire island is protected by the Anaho Island National Wildlife Refuge. The island is uninhabited by humans. Access to the island is highly restricted—no boats are allowed within 1,000 feet (300 m) of the shores.

The nature reserve protects a colony of American white pelicans, one of the two largest pelican colonies in the western United States.

All content from Kiddle encyclopedia articles (including the article images and facts) can be freely used under Attribution-ShareAlike license, unless stated otherwise. Cite this article:
Anaho Island Facts for Kids. Kiddle Encyclopedia.