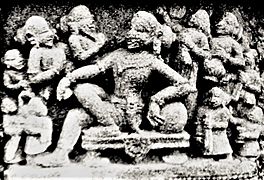 Anangabhima Deva III was a powerful Odia ruler and reformist of the Eastern Ganga Dynasty that ruled an early medieval Odisha centered empire in eastern India from the year 1211-1238 A.D. He was successful in maintaining a large extent of territory that stretched from the river Ganga in the north to Godavari in the South. He had successfully defeated the Kalachuris on the western frontiers of the empire and established a matrimonial alliance with them. His brother or brother in law, Rajaraja II became the ruler of the Dynasty in 1198. When Anangabhima III came into power, in 1211, he expelled the Muslims of Bengal from his kingdom. He had a son, Narasingha Deva I, who would later invade Bengal in 1244, and captured the capital city, Gauda. He was a reformist in the social and spiritual structure of the Odia society as the vaishnavite deity Jagannath was declared as the supreme ruler of the empire and the emperor as the deputy under him. The Madala Panji records he claiming himself as Shri Purushottama dedicating everything to lord Jagannath.

All content from Kiddle encyclopedia articles (including the article images and facts) can be freely used under Attribution-ShareAlike license, unless stated otherwise. Cite this article:
Anangabhima Deva III Facts for Kids. Kiddle Encyclopedia.