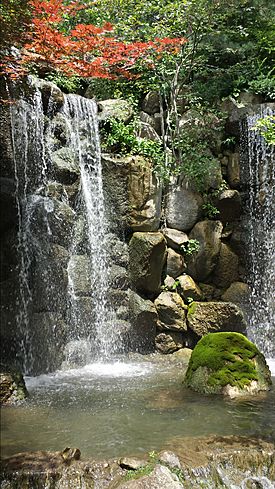 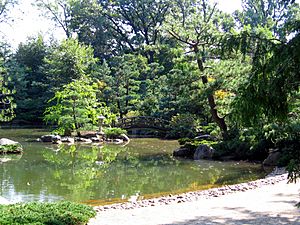 The gardens were established in 1978 by John R. Anderson and landscape architect Hoichi Kurisu on the site of Anderson's home. They were inspired by Anderson's trips to Japan, and particularly his visit to the Portland Japanese Garden in Washington Park, Portland, Oregon, which were also designed by Kurisu.

In 1992, John Anderson was recognized for his outstanding work in promoting international friendship and mutual understanding between the United States and Japan with a commemorative silver cup from the Japanese government. Educational programs at the Anderson Gardens cover the language, arts, and culture of Japan, and the Gardens host formal tea ceremonies, ikebana and calligraphy demonstrations, bonsai displays, and feature programs for students and adults. Anderson Japanese Gardens hosts an annual Opening Day Celebration and Japanese Summer Festival, featuring celebrations of Japanese culture. In 1998, Mr. and Mrs. Anderson donated the gardens to a nonprofit organization.

In 2004 the gardens were named finest Japanese garden in North America by the Journal of Japanese Gardening. In 2011, Tuesday Evening in the Gardens kicked off featuring singer/songwriters, local food vendors, and a friendly family atmosphere for guests to enjoy the gardens and performance.

The gardens are in a 13th-century "pond strolling" garden with several waterfalls and ponds, streams, rock formations, winding paths, and a sukiya style tea house and guest house (built by Masahiro Hamada). The "Garden of Reflection" is a contemporary Japanese-inspired garden, with bronze angel sculptures by Carl Milles. Plantings include Japanese maples, cloud pines, azaleas, magnolias, and rhododendrons.

The gardens are home to many species of colorful fish, minks, and ducks. In the "Garden of Reflection" beetle traps hang over the water to encourage these fish to surface for food. Professional photography is only permitted after hours with management approval, but amateur photography is encouraged. There are also many forbidden paths that lead up to the Anderson home. 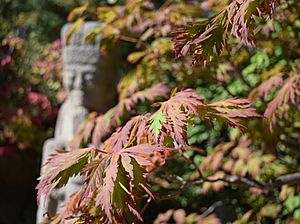 All content from Kiddle encyclopedia articles (including the article images and facts) can be freely used under Attribution-ShareAlike license, unless stated otherwise. Cite this article:
Anderson Japanese Gardens Facts for Kids. Kiddle Encyclopedia.