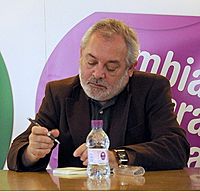 Andrés Ocaña Rabadán (1955 – March 2, 2017) was a Spanish politician and academic. He served as the Mayor of Córdoba from 2009 to 2011. He was a member of the United Left/The Greens–Assembly for Andalusia.

Ocaña was born in the town of Aguilar de la Frontera in the Province of Córdoba. He served as a member of the Córdoba city council from 1995 until 2011. Ocaña died of a myocardial infarction on March 2, 2017 in Córdoba, Andalusia, at the age of 62.

All content from Kiddle encyclopedia articles (including the article images and facts) can be freely used under Attribution-ShareAlike license, unless stated otherwise. Cite this article:
Andrés Ocaña Facts for Kids. Kiddle Encyclopedia.