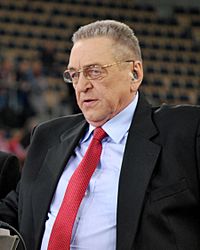 Andrzej Niemczyk (16 January 1944 – 2 June 2016) was a Polish volleyball player and coach. He was the coach of the Poland women's national volleyball team that competed at the 2005 Women's European Volleyball Championship. He was born in Łódź.

All content from Kiddle encyclopedia articles (including the article images and facts) can be freely used under Attribution-ShareAlike license, unless stated otherwise. Cite this article:
Andrzej Niemczyk Facts for Kids. Kiddle Encyclopedia.