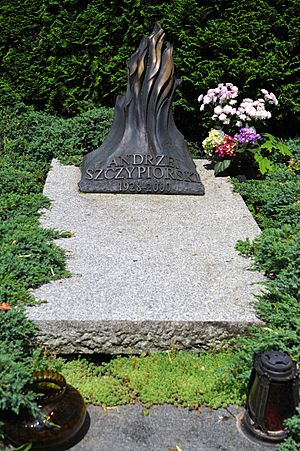 Andrzej Szczypiorski ( ; 3 February 1928 – 16 May 2000) was a Polish novelist and politician. He served as a member of the Polish legislature, and was a Solidarity activist interned during the military crackdown of 1981. He was a secret police agent in the 1950s.

He was son of Adam Szczypiorski, a political activist, historian and mathematician, and Jadwiga née Epsztajn. Szczypiorski had a sister Wiesława (1924-1945). He spent his childhood in Warsaw.

During World War II Szczypiorski studied at an underground university called the "flying university" due to the regular changing of its location for safety. He was a partisan of the Polish People’s Army, and a participant of the Warsaw Uprising. After the Uprising he was arrested and condemned to imprisonment at the Sachsenhausen concentration camp, where he survived until 1945.

In 1946-1947 he studied political science in the Warsaw Consular Diplomatic Academy. In 1948-1956, Szczypiorski worked as an editor in the Katowice Silesian Theater. During this period, in 1952, he made his literary debut in the magazine "Życie Literackie" using the pseudonym 'Maurice S. Andrews' and was inducted into the Polish Writers' Union. He won the Austrian State Prize for European Literature in 1988.

In 1956-1958, he was selected to serve in the Polish Embassy to Denmark, after which he returned to work as an editor on the radio and for publications. He later served as a member of the Polish legislature. He was also a UNICEF Goodwill Ambassador. Prior to his death, Szczypiorski converted to Calvinism, and is buried in the Protestant Reformed Cemetery in Warsaw.

After his death it became known that Szczypiorski was a collaborator of the Polish communist secret police in the years of Stalinism in Poland.

All content from Kiddle encyclopedia articles (including the article images and facts) can be freely used under Attribution-ShareAlike license, unless stated otherwise. Cite this article:
Andrzej Szczypiorski Facts for Kids. Kiddle Encyclopedia.