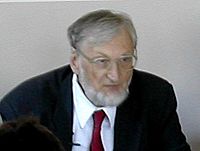 Andrzej Stanisław Walicki (15 May 1930 – 20 August 2020) was a Polish historian. He was a professor at the University of Notre Dame. He specialized in philosophy. He was one of the scholars who formed the "Warsaw school of the history of ideas".

All content from Kiddle encyclopedia articles (including the article images and facts) can be freely used under Attribution-ShareAlike license, unless stated otherwise. Cite this article:
Andrzej Walicki Facts for Kids. Kiddle Encyclopedia.