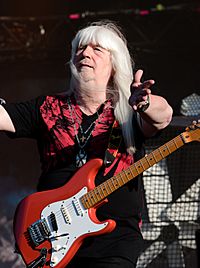 Andrew David Scott (born 30 June 1949) is a Welsh musician and songwriter. He is best known for being the lead guitarist and a backing vocalist in of the British glam rock band Sweet. After bassist Steve Priest's death in June 2020, Scott is the last living member of the band's classic lineup.

Scott was born in Wrexham. In September 2009, he was diagnosed with prostate cancer. He lives in All Cannings, Wiltshire.

All content from Kiddle encyclopedia articles (including the article images and facts) can be freely used under Attribution-ShareAlike license, unless stated otherwise. Cite this article:
Andy Scott (guitarist) Facts for Kids. Kiddle Encyclopedia.