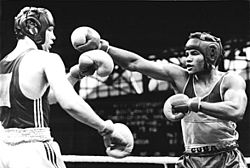 Ángel Espinosa Capó (October 2, 1966 – April 12, 2017) was a Cuban amateur boxer. He was part of the 1980s at junior middleweight and middleweight and captured the 1986 World Amateur Boxing Championships. He never won an Olympic medal due to Cuba's boycott of the 1984 and 1988 Summer Olympics. A hard hitting Cuban with a southpaw stance one of the most feared in his era was known to have about 300 amateur fights.

Espinose was found dead in his gym in Miami, Florida from a suspected cardiac arrest on 12 April 2017, aged 50.

All content from Kiddle encyclopedia articles (including the article images and facts) can be freely used under Attribution-ShareAlike license, unless stated otherwise. Cite this article:
Angel Espinosa Facts for Kids. Kiddle Encyclopedia.