Marine angelfish are group of fish of the family Pomacanthidae. They are found on shallow reefs in the tropical Atlantic, Indian, and mostly western Pacific oceans. The family contains seven genera and approximately 86 species. 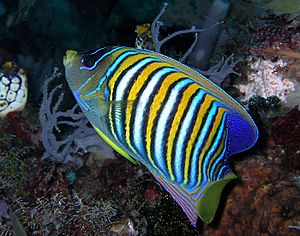 With their bright colours and deep, laterally compressed bodies, marine angelfishes are some of the more conspicuous residents of the reef. They most closely resemble the butterflyfishes, a related family of similarly showy reef fish. Marine angelfish are distinguished from butterflyfish by the presence of strong preopercle spines (part of the gill covers) in the former. This feature also explains the family name Pomacanthidae; from the Greek πομα, poma meaning "cover" and ακάνθα, akantha meaning "thorn".

Many species of marine angelfishes have streamer-like extensions of the soft dorsal and anal fins. The fish have small mouths, relatively large pectoral fins, and rounded to lunate tail fins. The largest species, the gray angelfish, Pomacanthus arcuatus, may reach a length of 60 cm (24 in); at the other extreme, members of the genus Centropyge do not exceed 15 cm (5.9 in). A length of 20 to 30 cm (7.9 to 11.8 in) is typical for the rest of the family. The smaller species are popular amongst aquarists, whereas the largest species are occasionally sought as a food fish; however, ciguatera poisoning has been reported as a result of eating marine angelfish.

The queen angelfish grows to be 45 cm (18 in). With neon blue and yellow scales and iridescent purple and orange markings, surprisingly it is not conspicuous, and actually hides very well, and is very shy.

The larger species are also quite bold and seemingly fearless; they are known to approach divers. While the majority adapts easily to captive life, some are specialist feeders which are difficult to maintain. Feeding habits can be strictly defined through genus, with Genicanthus species feeding on zooplankton and Centropyge preferring filamentous algae. Other species focus on sessile benthic invertebrates; sponges, tunicates, bryozoans, and hydroids are staples. On Caribbean coral reefs, angelfishes primarily eat sponges, and have an important role in preventing the overgrowth of reef-building corals by eating faster-growing sponge species.

Most marine angelfishes restrict themselves to the shallows of the reef, seldom venturing deeper than 50 m (160 ft). The recently described Centropyge abei is known to inhabit depths of 150 m (490 ft). They are diurnal animals, hiding amongst the nooks and crevices of the reef by night. Some species are solitary in nature and form highly territorial mated pairs; others form harems with a single male dominant over several females. As juveniles, some species may eke out a living as cleaner fish.

Common to many species is a dramatic shift in coloration associated with maturity. For example, young male ornate angelfish, Genicanthus bellus, have broad, black bands and are indistinguishable from females; as they mature, bright orange bands develop on the flanks and back. Thought to correspond to social rank, these colour shifts are not necessarily confined to males; all marine angelfish species are known to be protogynous hermaphrodites. This means that if the dominant male of a harem is removed, a female will turn into a functional male.

As pelagic spawners, marine angelfishes release many tiny buoyant eggs into the water which then become part of the plankton. The eggs float freely with the currents until hatching, with a high number falling victim to planktonic feeders.

There are 87 species in eight genera:

All content from Kiddle encyclopedia articles (including the article images and facts) can be freely used under Attribution-ShareAlike license, unless stated otherwise. Cite this article:
Marine angelfish Facts for Kids. Kiddle Encyclopedia.