Angelo Mangiarotti (26 February 1921 – 2 July 2012) was an Italian architect and industrial designer with a reputation built on "never forgetting the real needs of users". He mainly focused on the industrial process for buildings and design production. The main concept in Mangiarotti's architecture was established through the correct use of material and technique. 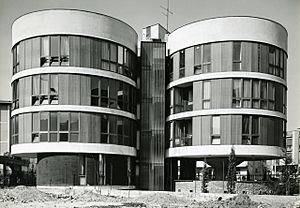 The "3 cylinders house", Milan, photographed by Paolo Monti in 1970

Angelo Mangiarotti was born in Milan, Italy in 1921. He was an architect, urban planner and designer whose designs earned him awards in Italy and abroad.

Angelo Mangiarotti graduated from the Architecture School of Politecnico di Milano in 1948. He moved to the United States in 1953 and started working in Chicago as a visiting professor for the Illinois Institute of Technology. During his time at Illinois Institute of Technology, Mangiarotti met Frank Lloyd Wright, Walter Gropius, Ludwig Mies van der Rohe and Konrad Wachsmann, all of whom were instrumental in his personal and professional growth.

Two years later, Mangiarotti returned to Italy and opened his own architectural firm in Milan with Bruno Morassutti. The partnership was active until 1960. 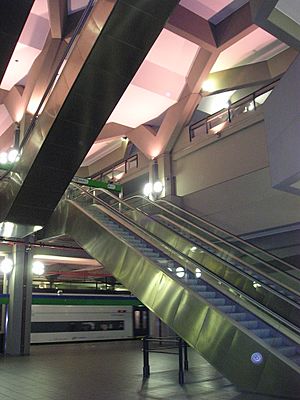 The following projects, selected by type, describe the main works of Studio Mangiarotti.

All content from Kiddle encyclopedia articles (including the article images and facts) can be freely used under Attribution-ShareAlike license, unless stated otherwise. Cite this article:
Angelo Mangiarotti Facts for Kids. Kiddle Encyclopedia.