Anglican Shrine of Our Lady of Walsingham facts for kids 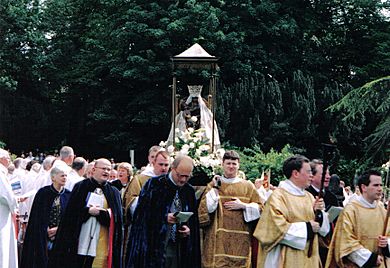 Anglicans processing their image during their National Pilgrimage to Walsingham within the grounds of the ruined abbey, May 2003.

Richeldis de Faverches was an English noblewoman who is credited with establishing the original shrine to Our Lady at Walsingham. Before leaving to join the Second Crusade, her son and heir, Lord Geoffrey de Faverches left the Holy House and its grounds to his chaplain, Edwin, to establish a religious house to care for the chapel of Our Lady of Walsingham. The Priory passed into the care of Augustinian Canons somewhere between 1146 and 1174. As travelling abroad became more difficult during the time of the Crusades, Walsingham became a place of pilgrimage, ranking alongside Jerusalem, Rome and Santiago da Compostela. The shrine was visited by Erasmus around 1512, by which time the shrine was reputed to have been built by angels in the late eleventh century as a replica of the Virgin's house in Nazareth, and he satirised the devotion of pilgrims at the site in the 1526 edition of his Colloquies. The shrine was destroyed by Henry VIII in 1538. The statue of Our Lady of Walsingham was burnt at Chelsea.

Father Alfred Hope Patten SSC, appointed as the Church of England Vicar of Walsingham in 1921, ignited Anglican interest in the pre-Reformation pilgrimage. It was his idea to create a new statue of Our Lady of Walsingham based on the image depicted on the seal of the medieval priory. In 1922 the statue was set up in the Parish Church of St Mary and regular pilgrimage devotion followed. From the first night that the statue was placed there, people gathered around it to pray, asking Mary to join her prayers with theirs.

Throughout the 1920s the trickle of pilgrims became a flood of large numbers for whom, eventually, the Pilgrim Hospice was opened (a hospice is the name of a place of hospitality for pilgrims) and, in 1931, a new Holy House encased in a small pilgrimage church was dedicated and the statue translated there with great solemnity. In 1938 that church was enlarged to form the Anglican Shrine of Our Lady of Walsingham. The enlarged church was blessed on Whit Monday, and thereafter a pilgrimage took place each year on that day, moving with the Whit Monday bank holiday to the Spring bank holiday in 1971. Since 1959 the Whit Monday Pilgrimage has been known as the National Pilgrimage.

During World War II, Walsingham was a restricted zone closed to visitors, but in May 1945, American Forces organised the first Mass in the Priory grounds since the Reformation.

Father Patten combined the posts of Vicar of Walsingham and priest administrator of the Anglican shrine until his death in 1958. Enid Chadwick contributed to the artwork in the shrine.

The shrine church was substantially extended in the 1960s. The church has a holy well known for its healing properties; the act of receiving water from the holy well is often accompanied by the laying on of hands and anointing. Water from the well is often taken home by the faithful and distributed to their family, friends and parishioners.

The grounds include the shrine church, gardens, several chapels, a refectory, a café, a shrine shop, a visitors' centre, the Pilgrim Hall, an orangery, the College (home to priests-associate when in residence), and a large number of different residential blocks for the accommodation of resident pilgrims.

Beyond the staff (who include a resident community, and external day staff) a number of groups are officially associated with the life of the shrine. These include:

All content from Kiddle encyclopedia articles (including the article images and facts) can be freely used under Attribution-ShareAlike license, unless stated otherwise. Cite this article:
Anglican Shrine of Our Lady of Walsingham Facts for Kids. Kiddle Encyclopedia.