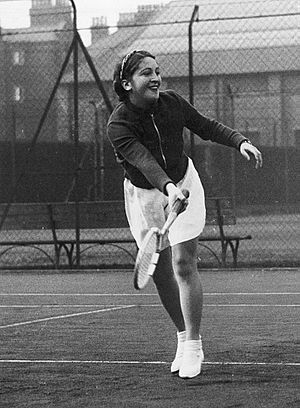 Anita Lizana de Ellis (19 November 1915 – 21 August 1994) was a world No. 1 tennis player from Chile. She was the first Latin American, and first Hispanic person, to be ranked World Number 1 tennis player. Also, Lizana was the first Latin American to win a Grand Slam singles championship. She won the U.S. Championships singles title in 1937, defeating Jadwiga Jędrzejowska in the final in straight sets.

In the singles event of the 1937 U.S. Championships, Lizana defeated three seeded players without losing a set to reach the final where she beat Jadwiga Jędrzejowska, also in straight sets. At the Wimbledon Championships, she reached the singles quarterfinals in 1936 and 1937. In 1936, she lost to second-seeded and eventual champion Helen Jacobs, and in 1937, she lost to sixth-seeded Simonne Mathieu.

After her marriage she limited her playing to some British tournaments. World War II and the birth of her children effectively ended her career as a top player. She did play some tournaments in 1946 and won the Scottish Championship in Edinburgh in July and the Scottish Hard Court Championships held at St. Andrews in August.

In Santiago she lived in a house within the boundaries of the Quinta Normal Park. In July 1938, at the Brompton Oratory in London, she married Scottish coal merchant and tennis player Ronald Taylor Ellis (d. 1978) and the couple settled in Dundee. They had three daughters. Lizana died of stomach cancer on 21 August 1994.

In 2015 the main court of the national tennis stadium in Santiago was named Court Central Anita Lizana in her honor.

R = restricted to French nationals and held under German occupation.

1In 1946 and 1947, the French Championships were held after Wimbledon.

All content from Kiddle encyclopedia articles (including the article images and facts) can be freely used under Attribution-ShareAlike license, unless stated otherwise. Cite this article:
Anita Lizana Facts for Kids. Kiddle Encyclopedia.