Following the obtaining of water rights, government consent and other necessary approval, construction and equipment supply contracts were let in the second half of 1977.

The Energy Companies Act was enacted in 1992, and amended later that year. This act required the corporatisation of the electricity and gas undertakings of electric power boards and municipalities with the aim of ensuring a commercial and efficient approach to electricity distribution and supply.

In July 1998 the New Zealand Government passed the Electricity Industry Reform Act which was intended to change the structure of the electricity industry to encourage competition. This Act required the operational separation of distribution and generation business activities by 1 July 1999 and separation of the ownership by 1 January 2004.

As a result, in 1998 Bay of Plenty Electricity sold its retail and generation business, together with its name to Nova Energy, which was owned by the Todd Corporation. On 1 April 1999, the remaining distribution assets were transferred to a new company, Horizon Energy Distribution Limited (which operates these assets under the name of Horizon Networks).

After a serious leak developed in the dam during Nova's ownership. Following investigations and development of a solution by consultants Tonkin + Taylor, the contracting firm of Waiotahi Contractors commenced in February 2006 the 58 day repair of the leak which took 58 day at a cost NZ$2.78 million.

At the beginning of December 2018 Pioneer Energy took over the services agreement with the Southern Generation Partnership to operate and maintain the power station. 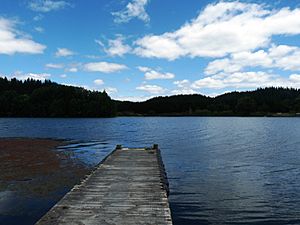 Lake Aniwhenua, the lake created by the dam.

A 200-metre-long, 10-metre-high dam located upstream of the eight-metre-high Aniwhenua Falls impounds the Rangitaiki River and Pokairoa Stream at their confluence at Black Road, Galatea, approximately 65 km upstream from the river mouth to create Lake Aniwhenua. Smaller dams also divert water from the Pokairoa into Lake Aniwhenua. The lake is 4.5 km long by approximately 500 m wide and is 255 ha in area. The maximum depth of the lake is 10 metres at the dam but it is typically less than three metres deep in other locations. The dam contains two wheeled penstock intake closure gates, two radial spillway gates which can discharge 1,270 cumecs of water. As well there are three additional flap type flood gates designed to handle higher flood conditions.

From the dam a 2.2 km long concrete-lined canal conveys water to the Pahekeheke Headpond, which was created by damming the Pahekeheke Stream. From the headpond two penstocks transport the water down to a powerhouse containing two Escher Wyss vertical Francis turbines which are each directly coupled to an ASEA 11 kV 12.5 MW synchronous generator. The station produces on average 127 GWh per annum. The output from the generating units is discharged back to the river just below the falls. The generator size was based on the desire to meet the power board's load factor of 65%.

The power station has a head of 38 metres.

Compensation water of a 2.5 cumecs is also released from the dam to preserve the original river channel and maintain flow over the falls. A small turbine coupled to a 100 kW generator is driven by the compensation flow and supplies power to the local distribution network via Horizon Energy's Galatea feeder.

Compensation water is also released from the headpond through a draw off pipe into the original course of the Pahekeheke Stream.

Via two 11/33 kV step-up transformers Aniwhenua is the primary supplier of electricity to Horizon Network's distribution network in the Galatea and Kaingaroa regions via a single 33 kV feeder that runs to Snake Hill and then splits into two feeders to supply Galatea with a further single feeder from Galatea to Kaingaroa. Any surplus above this local demand is exported via a 110 kV circuit to the Matahina Power Station where the two power stations combine to export electricity to the national grid via two 110 kV circuits to Transpower's Edgecumbe Substation.

For transmission pricing purposes a Prudent Discount Agreement exists for Aniwhenua that makes it part of the Edgecumbe GXP. Aniwhenua is operated to maximise injection into the Horizon network. If there is any generation in excess of local load, this is exported to the national grid. As a result, the power station is effectively embedded.

Operation of the power station is covered by the requirements of five resource consents, with the principal consent expiring in September 2026. The lake level operates between a normal operating range of 146.1 to 146.8 metre RL (relative to the Moturiki datum) with the emergency spillway having a level of 148.6 metre RL. The power station operates as a run of river scheme as the lake is small in terms of river flow. Low overnight demand allows refilling of the lake and drawdown to provide increased generation over the daytime peaks. and

The power station typically generates at least 8 MW, as below this value it will be necessary to spill water which will impact on the river downstream.

There is an ongoing programme to transfer migrating elvers and eels both upstream and downstream from the lake, to maintain eel stocks.

The headwaters of the Rangitaki River collect lightweight pumice sands and partly greywacke gravels which are deposited in the lake. During its first 15 years of operation the lake accumulated approximately 1.5 million m3 of sediment. Loss of storage has been managed by constructing training banks to encourage the sediment to settle in the deeper areas of the lake as well as lowering of the lake and flushing during floods.

In addition, it has been necessary to undertake limited dredging operations to remove sedimentation with 30,000 m3 removed in 2002.

All content from Kiddle encyclopedia articles (including the article images and facts) can be freely used under Attribution-ShareAlike license, unless stated otherwise. Cite this article:
Aniwhenua Power Station Facts for Kids. Kiddle Encyclopedia.