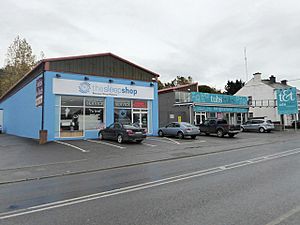 Shops along R446 road in the northern part of Ankers Bower

Ankers Bower (also Anker's Bower, Ankers' Bower, Ankersbower, or Anchor's Bower) is a townland and hill in St. Mary's civil parish in the barony of Brawny, County Westmeath, Ireland. It is partly within the former urban district of Athlone. The name may derive from John Ankers, who was vicar of St. Mary's in 1608.

All content from Kiddle encyclopedia articles (including the article images and facts) can be freely used under Attribution-ShareAlike license, unless stated otherwise. Cite this article:
Ankers Bower Facts for Kids. Kiddle Encyclopedia.