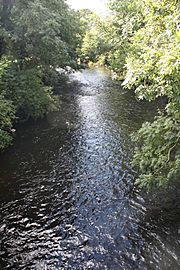 Annacloy River is a river in County Down, Northern Ireland, which rises in the Dromara Hills and flows into Strangford Lough.

The Ballynahinch River, flowing east through Ballynahinch, and the Carson's Dam River, flowing south through Crossgar, join at Kilmore, and the united stream is called the Annacloy River, and lower down the River Quoile, falling into the southwest angle of Strangford Lough near Downpatrick.

On the river between Mason's bridge and Kilmore there are regular and continuous rapids and weirs. Between Kilmore and Annacloy the river is quieter although there are still a couple of weirs. There are at least 2 dangerous weirs between Raleagh and Rademon. Below Annacloy the river calms down to Jane's Shore in Downpatrick. Canoeing is not at present permitted below Jane's Shore as entry to the Quoile Pondage National Nature Reserve is not permitted. The river is generally known as the River Quoile from Annacloy down through Downpatrick to the Barrage where it flows into Strangford Lough.

All content from Kiddle encyclopedia articles (including the article images and facts) can be freely used under Attribution-ShareAlike license, unless stated otherwise. Cite this article:
Annacloy River Facts for Kids. Kiddle Encyclopedia.