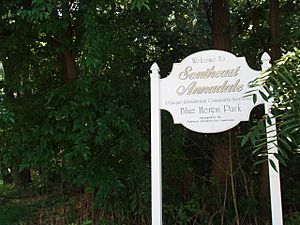 Annadale is a middle-class neighborhood on the South Shore of the borough of Staten Island in New York City.

The community received its present name circa 1860, and is named after Anna Seguine, a descendant of French Huguenots who were among the South Shore's earliest settlers; this settlement is also responsible for the neighborhood immediately to the southwest of Annadale being named Huguenot, and the Seguine family also lends its name to Seguine Avenue, the principal north-south thoroughfare on the east side of Prince's Bay, the next neighborhood southwest of Huguenot.

In 1929, immigrants from Spain purchased land along the Annadale shoreline, and founded a settlement that became known as the Spanish Camp, or Spanish Colony. First tents, and later bungalows, were built at the site. The site was purchased and buildings demolished at the end of the 20th century so that several large, upscale homes could be constructed.

Annadale once had abundant woodland, but much of it was cleared in the last three decades of the 20th Century to make room for new homes. However, a city park in the heart of the neighborhood was converted into a wildlife preserve; known as Blue Heron Park Preserve, it covers 222 acres (898,000 m²), much of it consisting of ponds, swamps and small streams which empty into nearby Raritan Bay.

The northwestern part of Annadale is now often regarded as a separate neighborhood known as Arden Heights. Southeast Annadale also harbors its own identity separate from the rest of the neighborhood. This quiet enclave is the section most often associated with Blue Heron Park.

All content from Kiddle encyclopedia articles (including the article images and facts) can be freely used under Attribution-ShareAlike license, unless stated otherwise. Cite this article:
Annadale, Staten Island Facts for Kids. Kiddle Encyclopedia.