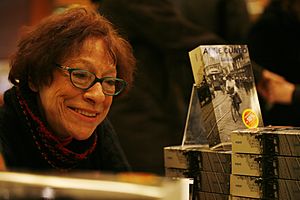 Anne Cuneo at a promotional event for her 2007 book Zaida

She was born in Paris. She studied in Lausanne. Her first novel came in 1967 and was called Gravé au diamant. In 1979 she received the lesser prize of the Schweizerische Schillerstiftung and by 1987 she worked for Télévision Suisse Romande.

All content from Kiddle encyclopedia articles (including the article images and facts) can be freely used under Attribution-ShareAlike license, unless stated otherwise. Cite this article:
Anne Cuneo Facts for Kids. Kiddle Encyclopedia.