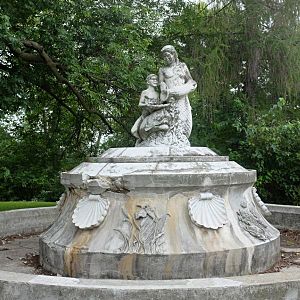 Circa 2014, Close-up condition of the fountain

The Annie C. Stewart Memorial Fountain is a fountain in Madison, the capital of the U.S. state of Wisconsin. Dedicated to the memory of Annie (Anna) C. Stewart (January 17, 1867 – April 8, 1905), who engaged in charitable activities in Madison, it was constructed in 1917–25 and erected in Henry Vilas Park in 1925. The fountain is located south of 625 Wingra Street, near the corner of Wingra Street and Erin Street (the former pedestrian entrance of Henry Vilas Zoo) in Vilas Park. The fountain is adjacent to an eagle effigy mound built by Native Americans overlooking Lake Wingra.

Annie Stewart was born in Baraboo, Wisconsin, to Frank and Mary Stewart on January 17, 1867. In 1870, her father, Frank Stewart, was appointed Clerk of the United States District Court and the family moved to Madison, Wisconsin. Throughout her life, Annie was active in local Madison charities and was a founding member and a former president of Attic Angels, an organization created in 1889 to provide children's clothing for local families in need. 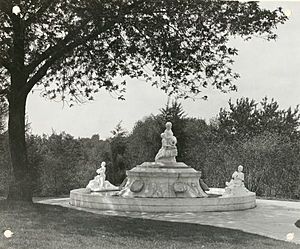 Mary C. Stewart died on November 21, 1905, a few months after Annie. Mary bequeathed a gift of $2000.00 to the Madison Park & Pleasure Drive Association to commission a drinking fountain in memory of her only child, Annie. The gift was to be used to construct a drinking fountain and in the will it stipulated that Annie's name was to be visibly inscribed on the fountain and that it be erected at an appropriate place in Madison in memory of her daughter. In 1911, while working with the Madison Park & Pleasure Drive Association, John Nolen, advised the Board of Directors to place the fountain in front of a proposed structure on the highest point of a parcel of land recently purchased with a gift from Mrs. Henry Vilas. The location for the fountain suggested by John Nolen offered a commanding view to the south and west and was intended to be the center of interest in Henry Vilas Park. Mr. Nolen felt that this location was appropriate due to the Stewart and Vilas families being close acquaintances. Like the Stewart family, the Vilas family had also lost their son, Henry (5/28/1872 - 7/2/1899).

A committee created by the Madison Park and Pleasure Drive Association, commissioned Frederick J. Clasgens (1879 - April 7, 1955) of Cincinnati, Ohio, for his fountain design after looking at the plans from multiple other proposals. Work on the sculpture began in 1917. The fountain was constructed by Mr. T.C. McCarthy under the direction of Clasgens. The fountain was divided into separate smaller projects to be then be assembled when it was all done.

The fountain has a circular basin made of white concrete with a diameter of 12 feet. In the center of the basin on a raised pedestal are dolphins and sea nymphs. Small tritons on the edges of the circular basin emptied water from their conch shells into smaller basins containing drinking fountains. The figures in the center were cut from white marble by Clasgens and his team. Work on the fountain was completed late 1924 and was assembled the early 1925. The Annie C. Stewart Memorial Fountain was unveiled that spring. 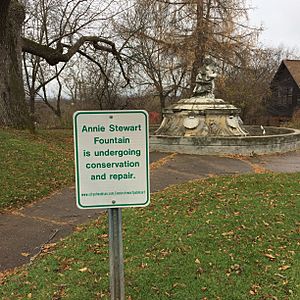 Circa 2016, Current condition of the fountain

In the summer of 1931, two boys seriously damaged and broke off one of the triton's arms with a hammer. Another group of boys destroyed the same triton in 1943. The one remaining triton was moved from the fountain for safekeeping and is currently missing. Time and weather have continued to deteriorate the fountain and the sculptures.

Members of the neighborhood and the City of Madison are currently working to restore the fountain as a non-water feature to be enjoyed by everyone who visits Vilas Park and Henry Vilas Zoo.

All content from Kiddle encyclopedia articles (including the article images and facts) can be freely used under Attribution-ShareAlike license, unless stated otherwise. Cite this article:
Annie C. Stewart Memorial Fountain Facts for Kids. Kiddle Encyclopedia.