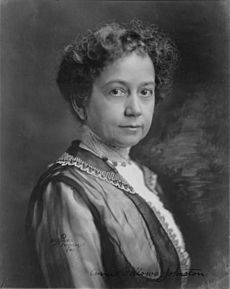 Annie Fellows Johnston (1863–1931) was an American author of children's fiction who wrote the popular The Little Colonel series, which was the basis for the 1935 Shirley Temple film The Little Colonel; many of the books were illustrated by photographer Kate Matthews. She was born and grew up in McCutchanville, Indiana, a small unincorporated town near Evansville, Indiana.

Johnston was born Annie Julia Fellows on May 15, 1863, the daughter of Albion Fellows, a Methodist minister at Trinity, and Mary Erskine Fellows. She had a brother, Erwin, and two sisters, Lura and Albion. She attended the University of Iowa for one year, returned to Evansville, taught school for three years, then became a private secretary. She married a cousin, William L. Johnstone. He was a widower with three children, Rena, John, and Mary. Rena died in 1899 and John in 1910 or 1911.

Johnston moved to Pewee Valley in 1898, the move becoming permanent in 1911. There, she lived until her death at "The Beeches" with her stepdaughter, artist Mary Gardener Johnston. The Beeches was built in 1901 by "Mamie" Craig Lawton, widow of Gen. Henry Ware Lawton, who was the only general killed during the Spanish–American War. Members of the Craig family inspired 12 characters in the "Little Colonel" stories.

Annie Fellows Johnston died at her home in Pewee Valley on October 5, 1931.

An assessment of her achievements in connection with her induction into the Kentucky Writers Hall of Fame says, "Her work is now considered anachronistic, depicting Reconstruction Era South still transitioning from the Civil War, and must be taken in the context of the times..."

All content from Kiddle encyclopedia articles (including the article images and facts) can be freely used under Attribution-ShareAlike license, unless stated otherwise. Cite this article:
Annie Fellows Johnston Facts for Kids. Kiddle Encyclopedia.