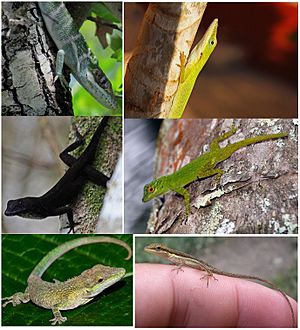 The ecomorph concept is a term first coined by Ernest Edward Williams in 1972 which he defined as a “species with the same structural habitat/niche, similar in morphology and behavior, but not necessarily close phyletically.” Williams first applied this definition to the Greater Antillean anoles (especifically in Puerto Rico) upon observing their evolutionary radiation, although it has since been used widely elsewhere.

These are anoles which inhabit the uppermost canopy of trees, they all share certain morphological characteristics such as relatively large body size, large heads, large sub-digital lamellae and serrated dorsal crest; most species are predominantly green. Crown giant anoles can be informally subdivided into long-legged species (which move by jumping from tree to tree) and short-legged species (which do not often jump and mostly crawl from one area to another). Because of their large size, these anoles can take a wide range of prey items from smaller lizards to small birds; all species are also known to consume fruit. Though they all share a similar body plan, crown giant anoles vary significantly in size from one island to the other. A few examples of crown giant anoles are shown below. 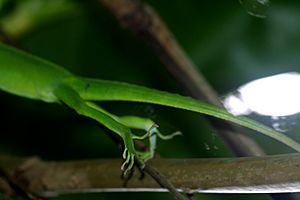 These are anoles which inhabit the uppermost reaches of the trunks of tall trees as well as the lower canopy; they are generally found several metres off the ground. Trunk-crown anole are usually predominantly green and have relatively large sub-digital toe-pads and short stout legs to aid in arboreal locomotion. These anoles eat small arboreal insects, smaller lizards, and some species have been observed to consume fruits and nectar; they have triangular, flattened heads, possibly to aid in nectar consumption. Trunk-crown anoles often exhibit the most drastic color changing abilities of any species and are capable of entering several darker phases which are used selectively from very dark to convey stress to light brown or grey for thermoregulation. Other anole ecomorphs are able to change color, but with the exception of some crown giants this is usually to a lesser extent. A few examples of trunk-crown anoles are shown below. 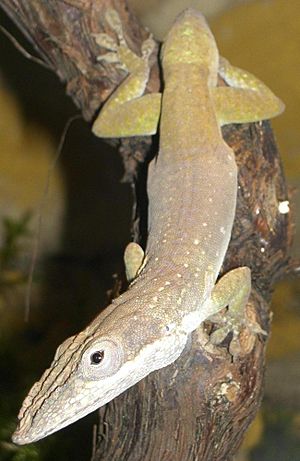 Anolis allisoni showing one of its thermoregulatory darker phases

Trunk anoles are found only on Cuba and Hispaniola in the Greater Antilles; however, the Hispaniolan species A. distichus is also native to the Bahamas and has introduced populations in Florida. Trunk anoles are mid-sized anoles with short limbs and tails and small, short triangular heads. As their name suggests, trunk anoles are found mainly on the trunks of tall trees and their diet consists primarily of ants.

Trunk-ground anoles characterized by their tendency to perch on the lower trunk of trees or on rocks immediately under the tree trunk, they typically perch with their head facing downwards to locate any insects located on the ground, after spotting food they jump down to capture it and retreat back up into the tree. These anoles will also eat smaller lizards or juveniles of their own species when the opportunity presents itself. Trunk-ground anoles are stocky and usually have relatively large heads and long legs to facilitate jumping. Anoles of this ecomorph are predominantly brown in color but can change to lighter or darker shades of brown based on their mood or body temperature.

All content from Kiddle encyclopedia articles (including the article images and facts) can be freely used under Attribution-ShareAlike license, unless stated otherwise. Cite this article:
Anolis ecomorphs Facts for Kids. Kiddle Encyclopedia.