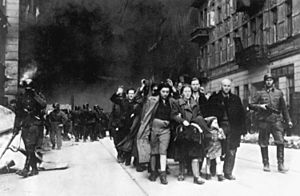 This image of the Warsaw Ghetto Uprising was chosen as the most famous picture by an anonymous photographer by The Photograph Book (1997) (ISBN 0-7148-3937-X), a book of 500 photographs by 500 famous photographers

Anonymous works are works, such as art or literature, made by someone who is anonymous. Some authors or artists choose to keep their identity a secret; others cannot reveal their names for legal reasons. In 2007, The Washington Post published an article by an anonymous author describing the use of national security letters by the FBI. In this case, the author, who would have preferred to be named, could not reveal his or her identity because it was against the law.

Some anonymous works are not created by people who choose to be anonymous, but their creators are unknown (not by choice). With some very old or ancient works, the creator's name may simply be lost over the course of history, or historians are not sure. In such cases the author is often referred to as Anonymus, the Latin form of "anonymous". In the United States it is legally defined as "a work on the copies or phonorecords of which no natural person is identified as author."

All content from Kiddle encyclopedia articles (including the article images and facts) can be freely used under Attribution-ShareAlike license, unless stated otherwise. Cite this article:
Anonymous work Facts for Kids. Kiddle Encyclopedia.