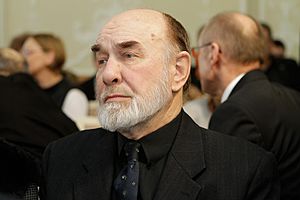 Antanas Šurna (27 March 1939 – 19 May 2014) was a Lithuanian stage and movie actor. He has appeared in over 100 movies and 50 plays. He is thought to be one of the most successful actors in Lithuania. His career began during the late 1960s. He won many awards during his 40-year career.

All content from Kiddle encyclopedia articles (including the article images and facts) can be freely used under Attribution-ShareAlike license, unless stated otherwise. Cite this article:
Antanas Šurna Facts for Kids. Kiddle Encyclopedia.