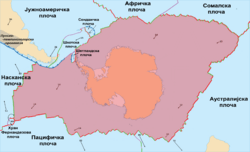 The area covered by the Antarctic plate.

The Antarctic plate is tectonic region that located in Antarctica, south pole. The Antarctic plate surrounded spreading centers at the oceanic edges of large neighboring plates. These include the Pacific, Nazca, South American, African, and Australian plates. The smaller scotia, South Sandwich, and Shetland Plates are considered to be part of Antarctic region and one of the Earth's seven major tectonics plate. It is moving at speeds varying from 4 to 20 mm/year. The Antartic plate includes continental crust making up Antarctica and its continental shelf, along with oceanic crust beneath the seas surrounding of Antarctica.

All content from Kiddle encyclopedia articles (including the article images and facts) can be freely used under Attribution-ShareAlike license, unless stated otherwise. Cite this article:
Antarctic plate Facts for Kids. Kiddle Encyclopedia.