Antelope is a census-designated place (CDP) in Sheridan County, Montana, United States. The population was 51 at the 2010 census. 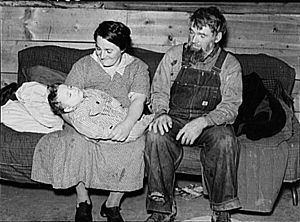 Named for the nearby creek, Antelope began as a tiny community along the Great Northern Railway’s Bainville to Scobey branch line in 1910. That year, John and Richard Grayson built a hardware store next to the Antelope Creek Lutheran Church. A post office, bank, lumberyard, and saloon soon followed. The community thrived during its first decade, adding general mercantiles, a butcher shop, a concrete plant, restaurants, and other businesses to serve the region’s growing homesteader population. Over the years, however, better roads to the south siphoned off business, and the “Biggest Little City in Eastern Montana” sank into decline.

Antelope celebrated 100 years as a community on July 3, 2010. They had a parade, lunch, a skit about the history of town, and a street dance, among time for people to catch up with one another and blow up games for the kids in the park. The bar was also re-opened for the celebration as a gathering place and place to get a drink.

According to the United States Census Bureau, the CDP has a total area of 0.1 square miles (0.26 km2), all of it land.

There were 21 households, out of which 23.8% had children under the age of 18 living with them, 38.1% were married couples living together, 4.8% had a female householder with no husband present, and 47.6% were non-families. 47.6% of all households were made up of individuals, and 14.3% had someone living alone who was 65 years of age or older. The average household size was 2.05 and the average family size was 3.00. 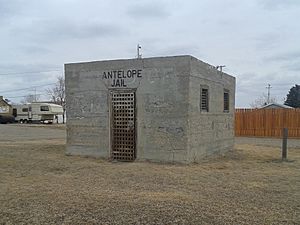 All content from Kiddle encyclopedia articles (including the article images and facts) can be freely used under Attribution-ShareAlike license, unless stated otherwise. Cite this article:
Antelope, Montana Facts for Kids. Kiddle Encyclopedia.